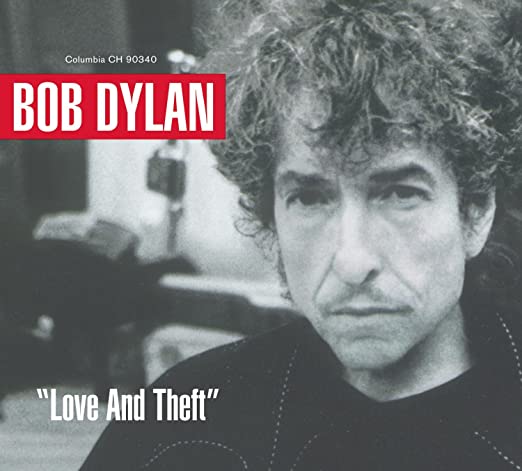 AFTER BOB DYLAN’S live performance and acceptance speech for “Things Have Changed” from New Zealand last year, comedian Steve Martin noted the satellite marvel the Oscar ceremony had just witnessed: “There’s an 18 hour time difference between here and there, which for Bob is normal.” It got the kind of laugh Dylan has earned over the past couple of decades: nervous titters that traced how big his songs loom in our culture, and just how phoned in his recordings have sounded since he Bible-thumped his way into the late ’70s.

Dylan’s Oscar came on the heels of his Album of the Year Grammy for Time Out of Mind, his induction into the Rock & Roll Hall of Fame, the Congressional Medal of Honor [sic], a command performance for the Pope, his cure for AIDS, and his globally televised healing of the lepers from the Isle of the Damned. None of this had much to do with his current work: critics had been praising his “comeback” of the ’90s for two acoustic cover albums: Good As I Been To You (1992) and World Gone Wrong (1993), but until Time Out of Mind (1997), his last recording of new material was Under the Red Sky (1990), little of which showed up during concerts.

And Time Out of Mind wasn’t so much a great piece of work as another rescue job by Daniel Lanois, the U2 producer who made Dylan’s embittered, self-pitying laments sound listenable (like he had on 1989’s Oh Mercy). Quite a few critics who praised Time upon its release admit they don’t listen to it much anymore. And the first thing Dylan spent his Grammy respectability on was in releasing his live tapes from 1966, long traded and bootlegged, finally issued as an aesthetic trump card: “Now that I’ve finally turned in something half respectable, let’s go back and listen to the stuff everybody’s really interested in,” Dylan seemed to be saying.

He’d been saying as much in his live shows for years. Except for odd curios like 1988’s “Silvio” (from Down in the Groove), Dylan’s concerts have centered around his mid-’60s work, pillars like “All Along the Watchtower,” “Maggie’s Farm,” “Love Minus Zero (No Limit),” “Don’t Think Twice It’s All Right,” “Ballad of a Thin Man,” “It Takes A Lot to Laugh, It Takes a Train to Cry,” and “Like a Rolling Stone.”

So Love and Theft comes out of a big aesthetic nowhere, and prompts some simple questions: why now? Why knock off a good piece of work in the midst of such mediocrity? How are we to consider the past two decades in light of better work he had in him the entire time? Apparently named for a 1993 study of black minstrelsy by Virginia social historian Eric Lott, Love and Theft is only tangentially about white exploitation of black culture. His new music is jaunty, the style is pre-rock’n’roll blues, and there’s more humor here than in most of his recent work since the Traveling Wilburys.

Even at his most acute, Dylan’s never as smart as he thinks he is; his singing, which shifts artfully between humble and ironic, redeems a multitude of lyrical sins. For years Dylan seemed to mumble, groan, and whine, subjecting melodies to his enigmatic capacity for negation. When he was on, this could make the simplest line seem deeply mysterious (“How does it feel?”). When he was withdrawn, it made songs simply go limp. On Before the Flood, his magnanimous 1974 live work with the Band, you can hear the players fight to keep up with the layers of violence and irony in his delivery.

Now, his writing seems to have revived his vocals. “I’m not quite as cool or forgiving as I sound” he sings in “Floater,” which is either hilarious or horrifying, and probably a little of both. The promotional video to “Tweedle Dee & Tweedle Dum” shows the bard at a poker game with Ricky Jay and several prostitutes, and it’s the kind of throwaway song that seems to harbor so much more than what the words give away. “They got a paid permit and a police escort…” Could it be about the 2000 election and the way Tweedle Dee finally knifed Tweedle Dum in the back with slicker PR and Supreme Court appointments? “Mississippi,” which was left off, is refurbished here from what he gave to Sheryl Crow, and rerecorded.

“Po Boy,” scored for banjo with lounge chord jazz patterns, almost sounds as if it could have been recorded around 1920. He leaves you dangling at the end of each bridge, lets the band punctuate the trail of words he’s squeezed into his lines, which gives it a reluctant soft-shoe charm. And finally, there’s a finale to be proud of, “Sugar Baby,” built on a disarmingly simple riff that turns foreboding. “Try to make things better for someone sometimes you just end up makin’ it thousand times worse,” Dylan sings, offhandedly ironic about trying too hard (yeah, right). It’s too little too late, and in no way makes up for all those flaccid records or betraying Sinéad. But somehow it’s enough.