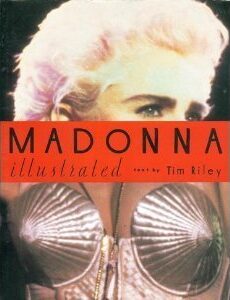 MADONNA IS THE POP STAR everybody loves to hate. She can’t sing, she can’t dance, she can’t act—she personifies the worst of what the 1980s did to pop culture. The cornier her misfortunes, the easier she is to knock: a nude-photo scandal, a failed celebrity marriage to a movie star, laughable performances—in a series of embarrassingly bad movies.

To her critics, Madonna’s talent doesn’t approach the magnitude of the fame she’s fashioned for herself. She may be a genius at self-promotion, but they commend she has nothing important to say, and her fans are an international horde of tin-eared sheep. If the masses find her trampy image entertaining, then pop deserves nothing better. But Madonna’s phenomenal success can’t be explained simply by putting her down. As of 1992, Madonna has had more number one hits than any other female artist of the rock era, the most consecutive Top Five singles since Elvis Presley, and more Top Five hits than any other artist in the 1980s. Since her debut in 1982, Madonna has sold more than 5 million albums and 16 million songs worldwide. And counting.

Numbers like that provoke a lot of questions. What makes Madonna so popular? How do her critics explain the millions of Madonna Wanna-Bes who imitate the way she walks and talks and wears her hair? Her explosive concert tours? Her seven platinum albums? Most of all: What does Madonna’s phenomenon say about us, the audience?

Female singers were once costumed and puppeteered by male producers. Male fans were meant to drool and fantasize about them, female fans were supposed to relate to how well they hooked their man. And hung onto him.

Madonna changed all that. She used sex to get over, but she had such a savvy understanding of sex as a tool that her frankness became part of her playful appeal. With her flair for glamour touched with cynicism, her knowing leer and insinuating vocals, she triumphed precisely because of her candid approach towards show business. Buying a Madonna records, dancing to her music in a club, catching her on MTV, gave you more than your typical pop fix. Madonna let her audience in on her sexual wiles, and winked at us as we fell for it. She never made any bones about her sales figures being as important to her as her songs.

Instead of ducking all the misconceptions she stirred up, Madonna turned her reputation into something to sing about. What began as a celebration of sexual pleasure grew into an ideal of female power.

Wanting it all, Madonna made it clear that wanting was a big step toward having. And in an era where every celebrity from Donald Trump to U2’s Bono made fame seem like a burden, Madonna made notoriety fun again.

Madonna’s goal isn’t merely to sell product—it’s to make her presence felt in every vein of pop culture. She borrows from the parade of the 20th-century pop figures so confidently she’s become part of its pageant. A 1991 Rolling Stone layout was a tribute to Brassai’s Paris brothels work. In Life magazine, and later Vanity Fair, she paid tribute to Marilyn Monroe as a model. For her “Justify My Love” photos, she impersonated Marlon Brando’s Wild One bikes—with cleavage.

Yet for all her borrowing, Madonna remains convincingly original—she’s a classic of a new kind. She makes Monroe and Brando seem even more classic by paying homage to the sheer inexhaustibility of their star status. The more you take in Madonna’s references, the more she makes them her own. In her “Material Girl” video, Madonna borrows from Marilyn Monroe’s “Diamonds Are a Girl’s Best Friend” routine in Gentlemen Prefer Blondes. But where Monroe turned her orphan’s bewilderment into a breathless sensuality, Madonna’s charm is mercenary, and submissiveness does not know her name.