He made his masterpiece, Sign o’ The Times (1988), by himself, with a token appearance by Scottish pop nymph Sheena Easton on “U Got the Look.” But the concert film of the same title found him working off Sheila E’s she-man drumming, bumping, and grinding with his back-up singers, and taking his “Little Red Corvette” for a spin. He’s the star of his own show, but he clearly gets off on musical interplay more than his ’80s counterparts Michael Jackson and Madonna. Of course, he loves to get that shy smirk on his face and blow his players off on their own instruments (drums, piano, guitar), just to live up to his Mozartian image.

And in a sense in his first film, Purple Rain (1984), he made a puppet dance into a mirror as a way of coping with the way his multi-racial, cross-sexual bandmates lost patience with his perfectionism.
So disciples of His Purpleness won’t be surprised to find that the double-disc soundtrack to Prince’s up-coming film, Graffiti Bridge, is a collaboration between his usual house players (himself, himself, and himself) and his friends Morris Day and the Time, Mavis Staples, George Clinton, and his backup singer, Tevin Campbell. Over the course of four album sides (68 minutes on a single CD) this strategy testifies to Prince’s good judgment about how to stretch his flaky-eccentric ideas across a broad canvas. Now if he’d just hire a lyricist.

Graffiti Bridge may not be the second chapter of Sign o’ the Times. For one thing, it doesn’t have anything that soars as high as “I Could Never Take the Place of Your Man.” But it exploits Prince’s bawdier instincts without buckling to the pressure to produce another magnum opus. With cackling virtuoso touches erupting in every transition, it levels off-hand jags like last year’s Batman (1989) soundtrack and its predecessor, Lovesexy (1988). 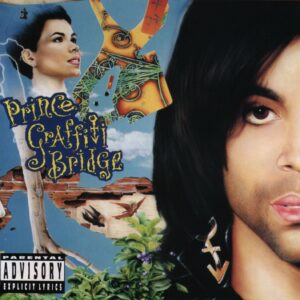 Prince’s grooves are snappy and fat-free, and he makes you gape at what spins out of them. In his world, even genre moves are worthy of the ecstatic release he invests. “Can’t Stop This Feeling I Got,” a rewrite of “Let’s Co Crazy,” opens the floodgates with no more than a downward guitar riff and a vocal fragment posing as a hook. To this he attaches rhythmic traps, guitar blips, stunning silences, and off-kilter effects that do far more than punch the song up. It’s not ice-hot, like “Alphabet St.,” but just try frowning it down.
His own delight in excess can make his reach toward larger statements sound flimsy. In “Elephants And Flowers” (I told you it was a circus) he sings the line “There will be peace for those who love God a lot.” His straight face alone is enough to make you wet your pants. A hard rap saves the finale, but the closing sequence that pairs “Graffiti Bridge” (a watered-down “Purple Rain”) with “New Power Generation (Part II)” stretches his love-redemption shtick to the limit and back. Still, that unwavering Prince charm turns this modern-day Andy Hardy God talk into another brand of subversion; it’s flake enlightenment as primal truism.

The Time weigh in on four numbers, easing Prince’s supercilious digressions with a bit more party-hearty funk. The best of these is “Shake!,” with nods to the Otis Redding classic; it surfs on a Farfisa organ straight to retro-nirvana. And Tevin Campbell’s spotlight, “Round And Round,” makes you ache to hear the unreleased tracks Prince produced for Bonnie Raitt a couple of years ago.

It’s not that Prince needs the support, or even that his voice wears thin (it’s his most underrated asset). But the group concept does take the weight off the expectation that Prince’s self-sufficient genius will save the world (which he’s still singing about), and it makes tired ditties like “The Question of U” and the title track (a sonic trip to Disneyland) more forgivable. Even ardent admirers will moan, “Shame about the ballads.” Prince has always had trouble going soft without going goopy. “The Question of U” loses steam after a couple verses and goes out for its second half as an instrumental. Even when he unloads some of his best gospel imploring, “Still Would Stand All Time” stands still for more than five minutes.

Most people assume Prince’s God talk is spiritual mumbo-jumbo—some kind of religious facade that drapes his horniness with a phony “higher” purpose. It never occurs to him to separate the two. That’s why Mavis Staples, whose album Time Waits For No One (1989) was produced by Prince, hasn’t been hit with the crossover backlash that gospel angels normally attract when they go pop. It’s not just that such distinctions don’t carry the same weight they used to—it’s that her fluttery alto is so suited to Prince’s kaleidoscope arrangements that any question of sincerity flies out the window. On Staples’ solo record, her deep-dug vocal grooves make you hear how self-mocking Prince’s singing is meant to be, and what a fine Svengali he’d make if he weren’t such a workaholic.

On Graffiti Bridge, the supporting acts aren’t just for distraction. Prince uses the reformed Time as a barometer of comic agility, and he holds his own just fine. This helps the lesser tracks assume their proper function (to stay icky sweet or funky and forgettable) and allows the higher moments their glory. The to-the-moon guitar solo in “Joy In Repetition” explains everything that the back-alley seduction in the lyric can’t get at.

When he fell on his back and jerked his pelvis upward with his dancers in his “Thieves In The Temple” video, I worried whether Prince would be the late-August liberation of a summer sans its requisite seasonal smash. But at the center of the record, “Thieves in the Temple” acquires a darkness and a foreboding that make it a far better social mirror than “Sign o’ The Times.” You sense there’s more to this track than the way he cops Madonna’s rubber-elbowed moves. And the video doesn’t clue you in to the thought-mongers and censorship cronies Prince skewers here (“They don’t care where they kick/Just as long as they hurt you”). When he sings, “You and me could have been a work of art,” the fear and anxiousness he catches speaks for even successful artists who suddenly find their work under attack. The Dawn of Censorship spawns its first brilliant retort.

When you think about it, what Prince has set in motion ought to pose a much bigger threat to moral hacks than any warning label flag can. The very notion that a black kid from Minneapolis could, in ten flashy years, establish himself as an international superstar with his own record label and stable of artists, and direct his own widely-distributed movies—this isn’t the kind of power Tipper Gore and her kind would like to hand over to a musical nympho with a sex fetish a mile wide.

That Prince does this with an interracial cast, without putting other races and classes down is that much more to his credit as a black artist, especially in the current climate. Lest we forget, Prince has fended off the commercial jingle franchisers his music has inevitably drawn; he remains one of the few pop stars not hawking soda pop. This more than compensates for the odd raspberry, the recycled psychedelic imagery, the Don Johnson half-beard. The way he gets his whole troupe joining in with him on how his show + luv gonna save the world makes U wonder whether his charisma alone could rescue the vapidity of that message.